EDITORIAL
1 . From Infrequent to Continuous Delivery
2 . The Journey to Self-Organization
3 . Observe your Users, Don’t Just Survey Them
4 . A Couple of Thoughts on People
5 . Dismantling Hierarchy: Easier Said than Done
6 . The Boundaryless Wisdom of Agile
Quotes
Seriously?

Many large organizations (having 1000+ employees) would like to move away from pre-digital-age management supported by traditional hierarchical structures. Their motivations vary.

Other organizations have practical reasons to dismantle or least decrease hierarchical ways of working. They recognize that linear plan-and-execute approaches supported by a strict chain of command are ill-suited to excellence in the digital-age.

They also recognize that an old-school work culture does not help the cause of recruiting and retaining talented millennials.

These motivations set the stage for change. But how does one decide how much to change? And what is the minimum level of change needed before one can claim victory over hierarchy?

Claims of Victory may be Premature

When is it accurate to claim that an organization isn’t a traditional hierarchy? Or that it has a flat hierarchy, or is networked, or non-hierarchical, or self-managed?

Unfortunately, there is no common standard for these modern labels. As a result, we hear premature claims like, “We have a flat-hierarchy.”, or “We practice self-management.”, after the slightest of moves away from a strict, command-and-control setup. This can be self-defeating.

Consider these examples of moving away from a traditional hierarchy. Executive leadership embraces an open-door policy or gives up their private offices. They begin hosting ask-me-anything sessions for employees. HR introduces 360-degree feedback in performance reviews. The transformation lead introduces company-wide digital discussion forums. Janitorial staff is treated better and no longer required to only use the service elevator.

Granted, these measures are steps in the direction of loosening the grip of hierarchy, but they often fall short of making a real difference to the functioning of the organization.

There are two reasons for this.

Reason number one is that the changes are implemented in a superficial manner.

The 360-degree feedback might not be effective unless the process has checks built in to prevent you-scratch-my-back-and-I-scratch-yours type of behavior.

The digital discussion forums might not see robust activity if leaders do not lead the way to dismantle older norms of not sharing information across teams or of not encouraging debate or tolerating dissent.

The ask-me-anything events might turn out to be a damp squib if the questions are filtered beforehand and there is no opportunity to respond to the prepared answers. 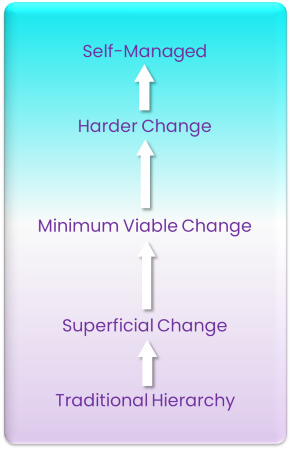 Superficial changes tick the box but do not achieve transformation. There is no harm in celebrating tiny wins, but when they are showcased in conferences as exemplars of self-management, they risk hurting the movement.

The second reason is that other, hard-to-make changes are required to make a real difference. What are these changes? They may be classified under different dimensions of hierarchy. Yes, there are various dimensions to what we generally mean by hierarchy. It is not a monolithic construct.

For example, a framework called Cleararchy (developed by the author), unpacks hierarchy in terms of three dimensions: reporting hierarchy, communication hierarchy, and decision-making hierarchy. Using this model, let’s consider a few examples of hard-to-make changes in each dimension.

Hard Things in the Reporting Hierarchy:

To reduce the ill-effects of a strict reporting hierarchy, it is important to reduce the asymmetry of authority (power) along the reporting chain.

Is it solely up to one’s manager to determine one’s performance review grades or to recommend a promotion or even a raise? If so, that is highly asymmetric even if 360-degree feedback is in place.

Same for horizontal mobility – does one’s manager have an absolute veto over requests to move to another team or group? Changing these features of a reporting hierarchy is hard.

What about two- or three-dimensional matrix organizations? Do they help reduce hierarchy? Not necessarily. Just because people now have one or more dotted-line reporting relationships in addition to the main solid line doesn’t change it from a hierarchical to a networked organization.

Hard Things in the Communication Hierarchy:

The ask-me-anything session mentioned earlier is an example of a change that aims to relax the communication hierarchy a little.

However, it is important to get the mechanics of the session right so that it does not come across as a PR exercise. It needs to have more of a lightly moderated press-conference vibe. That is only possible if leaders are willing and able to engage with counterquestions to their responses. That is just one example.

Some organizations have regularized skip-level meetings – occasional catchups with one’s boss’s boss. Again, this can be hard to get right. Insecure managers may demand a pre and post briefing with their subs. Some may even manage to get themselves invited to the meeting between their boss and their sub. The boss’s boss might not take the meetings seriously. Clear guidelines from HR, regularly reinforced, might help get it right.

It is easier to loosen the communication hierarchy than the reporting or decision-making hierarchy, and many organizations have done so. In many modern organizations, anyone can (and do) talk to anyone else in the organization without having to take prior permission from their manager.

Hard Things in the Decision-Making Hierarchy:

In case of moderate to high-stakes decisions, decision-making is usually centralized and not inclusive of lower ranks in traditional hierarchies. It can be hard to progress towards inclusive decision making, let alone making it decentralized.

Some organizations begin the journey of becoming more inclusive in decision-making with baby steps (superficial change) but struggle to progress to adolescence or even childhood.

For example, they might begin by letting employees collectively decide on the color of the carpet for a new office, or the names of meeting rooms, or the types of free snacks in the office cafeteria, etc., but they struggle even to get to a stage where HR policies are drawn up (or amended) after due consideration to collective input.

The hard things described above are just a few examples. There are many more such instances where change is not easy, but achievable with some effort.

Several organizations have mastered this level of difficulty. Granted, many of them were born that way. It is a greater challenge for large, established organizations to change the hard things. Nevertheless, that is the minimum viable level of change necessary to even have a chance of excelling in the digital-age – and to claim bragging rights about not being an old-fashioned hierarchy.

It is hard enough to make minimum viable changes to hierarchical organization and ways of working.  Going beyond it is harder. Again, as before, let’s look at examples across the three dimensions.

Harder Things in the Reporting Hierarchy:

In large organizations, there may be more than a dozen levels of reporting between an entry-level person and the CEO. That is very hierarchical, but it is not possible to reduce it without overshooting limits on span-of-control.

An advocate of self-management might ask if it is necessary for everyone to report to someone. Legal and practical issues aside, the answer is yes because that is how the efforts of large groups are organized and aligned with the group’s objectives.

Without hierarchy, even social and political movements falter.

Harder Things in the Communication Hierarchy:

What information is communicated or made available to someone depends on where they are in the communication hierarchy. This is inherently asymmetric.

A person higher in the hierarchy might ask for all manner of work-related information from someone lower, but not vice versa.

It can be extremely hard to reduce the extent of asymmetry in this regard because people in traditional setups tend to be habituated to guarding information jealously.

Harder Things in the Decision-Making Hierarchy:

Decentralizing decision-making is way harder than making it inclusive which is hard enough as we saw earlier.

The privilege of deciding how to spend an organization’s money is invariably reserved for a select few, that too in terms of progressive limits. Others may suggest, but only a select few may decide. Same goes for the decision to contract with another entity and the right to sign contracts as an authorized signatory. The right to speak officially on behalf of an organization (or to decide what to say) is similarly reserved. Would it be advisable to do away with these controls in the name of self-management?

Other areas of decision-making offer greater opportunity. For example, there are instances where a transnational corporation has let a country level general manager abolish sales targets or commissions for their region. But even here, it is worth noting that the decision right was with the general manager of that region (and rightly so), not with every employee.

If you have read up to this point, you might have begun to wonder if we can ever get rid of hierarchical organization and ways of working in large organizations.

For the vast majority of large organizations, the answer is no.

Cleararchy takes the view that hierarchy is inevitable, it cannot be eliminated, and that is no reason to despair. Hierarchy is not bad per se, its abuse is. It is possible to reform hierarchy to minimize dysfunction without taking away its power to organize and align efforts.

Counterexamples do exist. An exceedingly small minority of medium to large organizations have mastered some of the harder things under exceptional leaders, and books have been written about their success, but even they have struggled to sustain it under new management or ownership.

True democracy is much more than having free and fair elections every few years. Elections are hard enough, but true democracy includes harder things such as free speech and not too extreme economic inequality. It also requires that private interest does not prevail over public interest via lobbying, political donations, or coercion by more powerful countries.

No country has overcome these challenges. There is occasional progress, but there is regress as well. 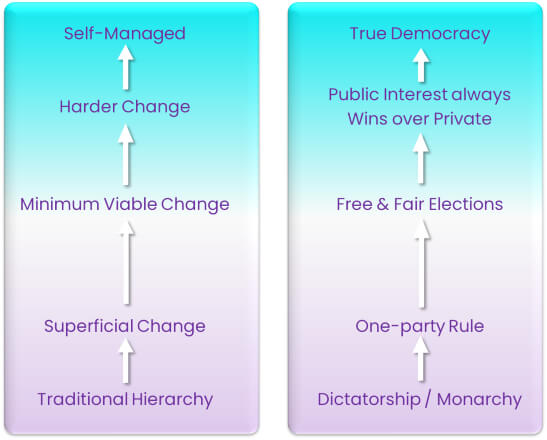 When it comes to reducing hierarchy, superficial change is easy, minimum viable change is hard, and deeper change is much harder.

Hierarchy cannot be eliminated in large organizations, but it may be tamed with great effort in a manner that retains its good parts and prevents its dysfunctions. Beware of glib claims to the contrary.

I am Sriram Narayan and these are my agile-thoughts​ 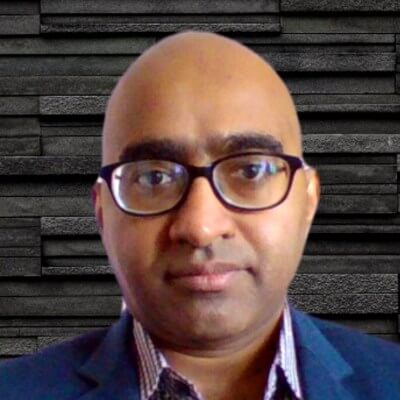 Sriram is an independent management consultant and VP, Transformation Advisory, at ThoughtWorks.

His first book, Agile IT Organization Design, was published by Pearson in 2015. He strives to help tech and non-tech organizations worldwide overcome the challenges of the digital age.