Leadership, Influence and the Power of the Flock

Last month, in the first part of this article, we explored the flocking behaviour of starlings as an example of “co-ordination rules,” how pigeons invariably form flocks to pursue their goals together, and why, in this context, “high-influencer” is probably a better term than “leader.”

We mentioned that “dominant” birds are ones which show more aggression in accessing food and so stand at the top of the flock’s social hierarchy.  However, the “leaders” in the air are different.

They are leaders in the sense that they exert greater than average influence on the flying behaviour of others. A “leader” in the air is a bird with fast-followers.

So how do the birds choose the ones they wish to follow most rapidly?

The factor which correlates most closely with high-influence is solo flight speed. The researchers tested the pigeons in solo flights to identify which ones were fastest and which ones were the best navigators, defined as flying the most direct routes.

Pigeons in the flock follow faster birds regardless of their navigational ability because the faster birds are usually at the front of the flock and can therefore be observed more readily than those at the back.

However, this sets in train a learning process.

Something similar can be observed in humans: drivers of cars learn routes better than passengers.

As a result, faster birds learn to become better navigators.  If the flock is influenced by them, it gets home faster, thus saving energy, so the flock learns to follow them.

There are no absolute leaders; even lower ranked birds are sometimes followed for short periods, but some birds are consistently high influence over different routes.

Higher flying speed makes a bird look more confident, which may be the cue the others are looking for, but it translates over time into genuinely superior competence.

They are working harder than most and there is a limit to their willingness to fly faster. Faster birds will slow down in order to stay in the flock. They do so not just to save energy but because being in the flock means safety.

The researchers know the fast-flying birds also learn faster than the others because after a flock flight, they took a more direct route home than they had on their preceding solo flight.  The average birds improved far less. 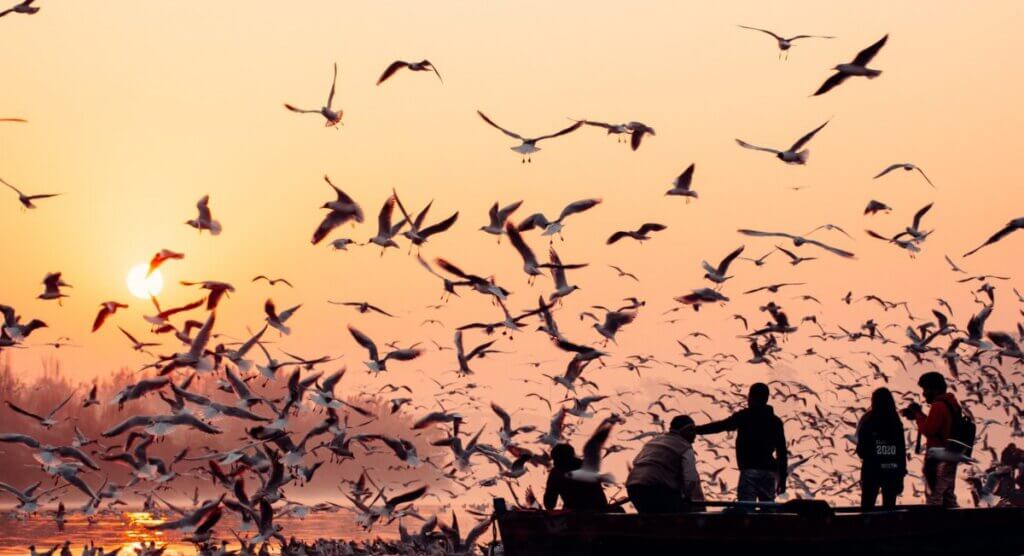 The researchers also compared the directness of solo flights with flock flights. This showed that the distribution of flock efficiencies was significantly higher than the distribution of solo efficiencies. In other words, pigeons in flocks generally out-performed solo birds.  So, it appears that pooling information tends to have a higher value than an emerging expert following its own best judgement.  The reason for this has to do with the way in which the pigeons learn.

The Wisdom of the Flock

Animal learning is a process of trial and error defining what some scientists call the “zone of latent solutions.”

A good individual navigator learns for itself until it finds a good route, one that is better than the average, and then sticks with it. If the route works, the bird has no incentive to vary it.  However, there may be a better, more direct route. The individual will never find it. Doing so takes other individuals doing something different.

The system works. The birds always get home. There are occasional losses to sparrowhawks, but the success rate is well over 90%.

The team has conducted some specific experiments to explore how the system works.

They gave a bird or small number of birds extra training to see if when flying in a flock they went up the influencer rankings.  There was only a marginal change.  So speed, and to some extent habit, dominated navigational skill.

When they released five trained birds and five untrained ones from the same spot, the trained ones did not exert more influence as a body, but the most influential bird was from the trained group.  This may have been a matter of chance.

They also tried the opposite by taking a leading bird and shifting their inner clock by ‘jet-lagging’ them, so that their bearings were off.   The influence of this bird dropped, and it stayed with the flock.  For most birds following the route dictated by rules 1 and 2 dominated the actions of a formerly reliable influencer who had become a maverick.  The new maverick followed rule 2 over rule 1 although it must have felt the flock were going the wrong way.

When they released just two birds together, the usual result was a compromise route unless one bird was substantially more experienced, in which case the less experienced one would follow it.  Usually, the two rules tended to be held in balance.  They rarely split up. 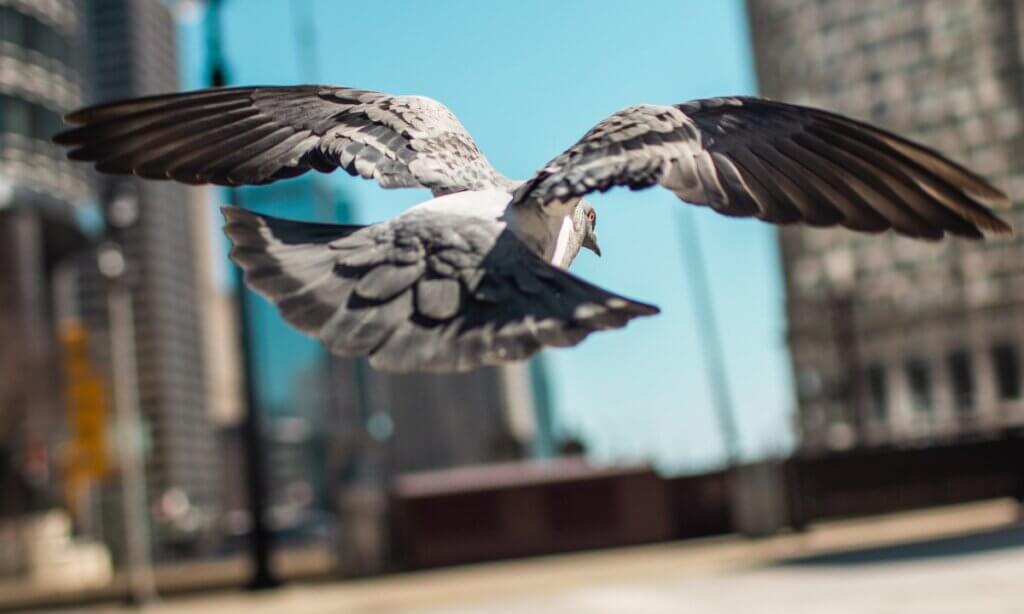 What in some ways is the most interesting experiment of all is still underway.  It has been found that the navigational performance of flocks improves until it reaches a plateau.

The current thinking as to why this should be is as follows.

All the birds in a flock exert some influence on the others.  Differences in influence are matters of degree.  All birds vary their flight patterns slightly within the two rules, like the inanimate particles in active-matter theory.

After a while the flock has absorbed all the information from the variations of its members, so it stops learning and its performance plateaus.

New members introduce new variations.  Naïve new members are less sure of what they are doing than experienced ones, so they introduce more variation.

The wisdom of the flock then takes over: the more experienced birds reject bad variations and adopt good ones, so flock performance starts to improve again.  Introducing naïve birds therefore has no downside.  If what they do does not work, it is not copied and they adapt to the flock.  If it does work, it is copied and the flock adapts to them.

The wisdom of the flock comes from the fact that every individual has an opinion and can decide who to follow.

Where does this leave us?

Aidan believes that rule-following explains most behaviour in human organisations.  Most of it is implicit and goes on whatever the appointed hierarchical leaders say.  Perhaps appointed leaders can learn to be more effective by thinking of themselves as influencers rather than using the authority granted to them by their office.

Influence is context-dependent.  In a natural state, leaders are leaders because people choose to follow them.

Confronted with an unfamiliar task in which none of them is an expert, a group of people will often tackle it without appointing a leader.  Like the pigeons, we humans have a social hierarchy and some individuals are by nature more dominant than others.  Faced with the task of getting home, the pigeons wisely forget about all that.  Perhaps we should too.

Sometimes, usually when the chips are down, we do.  During the Battle of Britain, RAF fighter squadrons which had inexperienced leaders or whose leaders had become casualties were led in the air by the most successful pilot, regardless of rank.  But then, getting it right was a matter of life or death. 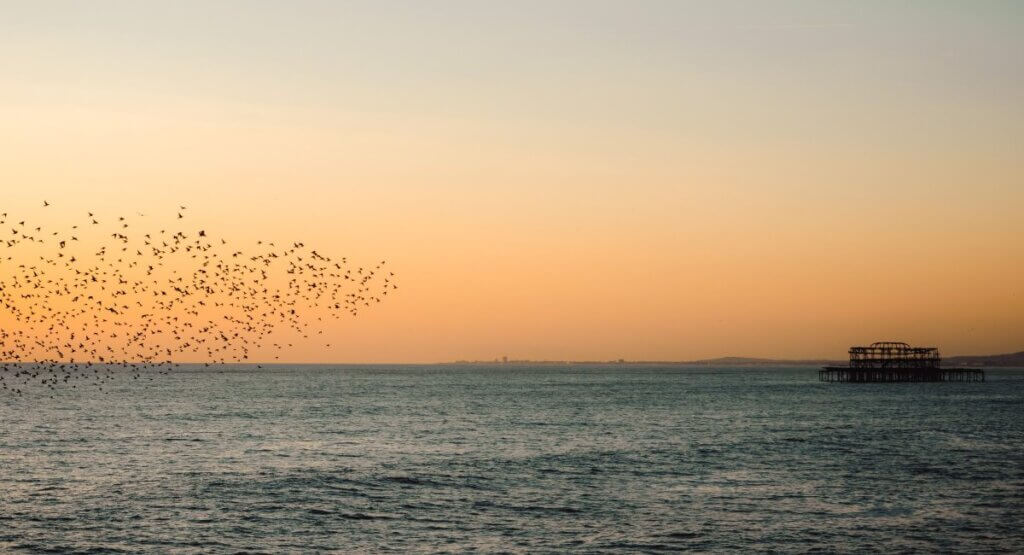 One difference between business organisations and the pigeons is that whilst the pigeons have a shared goal, businesses have a collective one.

A collective goal is one which can only be achieved through co-operation and involves carrying out a wide variety of tasks.  This poses a business leader with the two challenges of determining what the goal should be and of turning the collective goal into a shared one.

The task of setting direction and working out a strategy implies an understanding of context which means crafting usually starts at the top.  However, it only starts there.

Both crafting the strategy and getting it done involves many people down and across a hierarchy, and here we are wont to ignore the power of self-organising systems like flocks.

Some of the most successful organisational mechanisms work by defining an outcome to be achieved, finding people who want to achieve it and let them get on with it.

One key to successful recruiting is to find people who are not just competent, but share the collective aspirations and values of the company.

There are a few companies out there, such as Linux or Wikipedia, which rely entirely on gathering together the efforts of individuals who share personal goals to fulfil a collective one, and do so without a hierarchy.  Like the pigeons in the air, their ‘leaders’ are high-influencers rather than individuals given authority, and vary by context.

Business leaders put a lot of effort into persuading those lower down the hierarchy to follow a direction they set.  But followers always have a choice whether to do so or not, even if the leader is an authoritarian tyrant.  Ultimately, they can opt out entirely by resigning.

If leaders think of themselves as influencers, and understand the rules people are already following, then if they believe it is necessary, in the interests of the collective goal to adjust or change direction, they can do so most effective by explaining the context and nudging the rules.

Jack Welch changed the direction of the massive flock which was GE not by re-writing the plans of each business unit but by introducing the rule that they all had to be number one or two in their business.  That was also probably a goal the business unit leaders shared – they all wanted to be winners and make money.

The pigeons also point to an error of which many organisations are guilty: the suppression of variation.  This is done under many headings: quality control, best practice, teamwork, process, compliance…the list is long.

We applaud the free flow of information in markets, but run the companies which constitute them like mini-Soviets, complete with 5-year plans.  Only in the fluid environment of start-ups are variation, and therefore innovation the rule.

However, in established companies, breakthroughs in performance are often produced by mavericks, or simply naïve newcomers who are ignorant but intelligent.

The mechanism of performance improvement detected by Dora and her team of adding naïve members to a group that is already successful may be one of the most profound lessons we have to learn from the wisdom of pigeons.

I am Stephen Bungay and these are my agile-thoughts​ 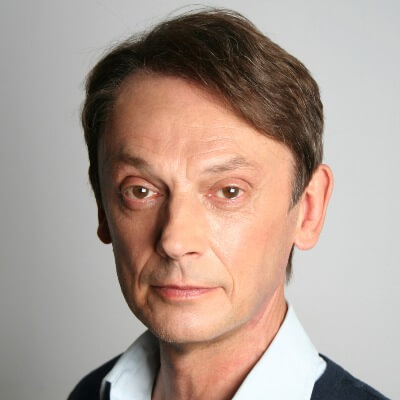 Stephen Bungay teaches on executive programmes at several business schools, works as an independent consultant and conference speaker, and has published several books on military history and business strategy execution.

His current work is focussed on the most effective ways of developing an agile strategy in an environment of high uncertainty.

One of his oldest passions is strategy.  “As a boy I played wargames published by a US company called ‘Strategy and Tactics’.  This led to an interest in military history that has been enduring.  When I started looking for a job, I discovered to my surprise that there were firms called ‘strategy consultants’ that helped businesses to develop strategies.  I had no idea that businesses needed them.  But I was hooked, and joined the Boston Consulting Group.  The rest, as they say, is history.”